In one respect, the construction and rebuilding after hurricanes Katrina, Harvey, Irma and tropical storms Jose and Maria failed before it even got started.  Rusting, or rusted out, hurricane ties and joist hangers played a key role in the horrendous destruction caused by high winds.  In the rebuilding effort, all of the galvanized steel construction components such as joist hangers, hurricane straps and ties, and reinforcing straps should be coated to stop corrosion and ensure the structure stays connected, even through a hurricane.  Such risk mitigation will reduce major storm costs and reduce total settlement costs by the insurance industry.

How can we say this with such certainty? We can say this because within a few weeks after reconstruction began, brand new, galvanized construction components were observed to be rusting.  Some were already pitted.

We can say this because, wherever there is oxygen and moisture, corrosion and rust will exist and thrive. When those two factors are combined with salt and corrosive elements in the air, sand and soil, the rate of corrosion increases. Throw in humidity – especially in regions where 50% humidity or higher increases the rate of corrosion exponentially – and it’s safe to say that construction everywhere is failing. 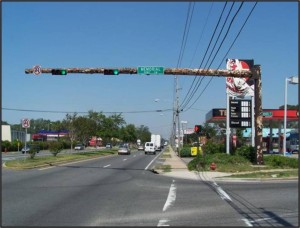 A layer of zinc galvanizing is applied to much of the steel that will be exposed to the elements. Utility and traffic structures, and construction components and fasteners are usually galvanized. That layer of galvanizing is called a “sacrificial” coating. It takes upon itself the damage that is caused by corrosive elements in the air, water, and soil, thereby protecting the steel underneath. The photos on this page show what happens once the galvanizing has reached its sacrificial capacity 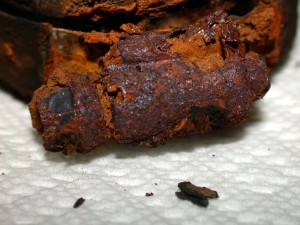 When two dissimilar metals are in close proximity to one another, galvanic corrosion occurs. This can even happen with stainless steel. The band clamp pictured here is composed of two different grades of stainless steel. One corroded the other and eventually destroyed the clamp.

In 2006, a solution to this problem was created by taking a tough, inert, non-porous polymer skin and using it to coat construction components. In initial testing, this product known and trademarked as Storm Greeter fared exceptionally well, performing beyond what building codes require. Salt and sunlight have no effect on it. It is highly abrasion resistant.

The coating is impervious to marine life. When immersed in red clay or sand, and exposed to constant moisture and oxygen, Storm Greeter excels. Storm Greeter has been exposed to swings in temperature of 120 degrees F without delaminating or cracking. These results can mean the addition of years – or even decades – to the lifespan of steel.

Read our Quick Facts Sheet for more information about the Storm Greeter system!