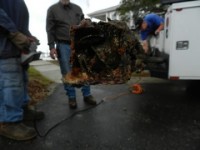 Sun Tzu said “The supreme art of war is to subdue the enemy without fighting.”

Storm Greeter remains flexible for the life of the substrate, whether it was applied as a heat-cured liquid or as a pre-cured coating.  A 60 mil layer of Storm Greeter, applied to a steel substrate, can bend 180 degrees and return to its original shape without breaking and without discoloration.  Even the most expensive paints on the market can’t say that.

In UV testing, Storm Greeter was pitted against one of the most widely used polyurethanes.  After 30 days of the ASTM G154-06 and ASTM G151-00, Storm Greeter had lost 3.3% of its surface reflectivity.  The polyurethane lost 98.2%.  The rep from the polyurethane manufacturer was quick to point out that their product requires a layer of UV protectant and that hadn’t been applied before the test.  However, Storm Greeter didn’t have a UV protective layer either.

To determine Storm Greeter’s abrasion and impact resistance, Ovante had to develop a test called the HVLI-12.  The High-Velocity, Lead-Implant test involves 400 steel pellets fired from a 12 gauge shotgun at a velocity of 1,255 feet per second.  From 75 feet, there was only light scuffing of the Storm Greeter surface.  From 60 feet, still light scuffing and two discolored spots.  From 45 feet, 2 pellets embedded and there were 4 discolored spots.  The Storm Greeter coating was less than an hour old.

When it comes to salt water and marine life, Storm Greeter wins hands down.  From the very first SWAAT test, to the ASTM B117 Salt Fog, through the 13-month Alabama DOT test in the bay at Orange Beach, AL, it’s easy to see that Storm Greeter loves a salty environment.  In addition to the DOT test, Storm Greeter has been tested in open water two other times.  In each instance, marine life adhered to the coating’s surface but could not penetrate it.  Barnacles that have been on the surface for 13-months can be removed with a flick of a fingernail.

Instead of battling nature and worrying what the outcome will be, use the coating that subdues its environment and adds predictability to asset management.  Use Storm Greeter!