Update from 1.19.16:  The Storm Greeter Peel & Stick (SGPS) coating system has been applied to galvanized substrates at 30 and 23 degrees Fahrenheit, (-1 and -5 C).  The substrate was then ready for service.  No curing time required.

Storm Greeter is a heat-cured polymer.  Ovante has taken the heat curing part out of the application process, supplying a rapid application, highly forgiving coating solution. We began working with Storm Greeter in 2006 as a coating  for construction fasteners and components.  The coating is corrosion proof!  It is inert, non-porous, UV and abrasion resistant, and remains flexible for the lifetime of the substrate.  In fact, it’s so flexible that it can be twisted 360 degrees without cracking or delaminating from the substrate.

The SGPS has a life expectancy of 50 years.  The annual coating cost per square foot is reduced by as much as 50%, while labor is reduced by as much as 90%. Ovante developed a way of applying the VHB to the pre-cured Storm Greeter sheet.  That method is now patent-pending.  The SGPS goes on quickly and requires a clean surface.  No mixing, no chemical fumes, and minimal PPE. 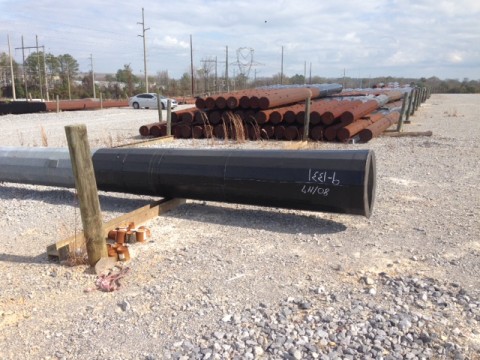 In UV testing, Storm Greeter was pitted against one of the most widely used polyurethanes. After 30 days of the ASTM G154-06 and ASTM G151-00, Storm Greeter had lost 3.3% of its surface reflectivity. The polyurethane lost 98.2%. The rep from the polyurethane manufacturer was quick to point out that their product requires a layer of UV protectant and that hadn’t been applied before the test. However, Storm Greeter didn’t have a UV protective layer either.

To determine Storm Greeter’s abrasion and impact resistance, Ovante had to develop a test called the HVLI-12. The High-Velocity, Lead-Implant test involves 400 steel pellets fired from a 12 gauge shotgun at a velocity of 1,255 feet per second. From 75 feet, there was only light scuffing of the Storm Greeter surface. From 60 feet, still light scuffing and two discolored spots. From 45 feet, 2 pellets embedded and there were 4 discolored spots. The Storm Greeter coating was less than an hour old.

When it comes to salt water and marine life, Storm Greeter wins hands down. From the very first SWAAT test, to the ASTM B117 Salt Fog, through the 13-month Alabama DOT test in the bay at Orange Beach, AL, it’s easy to see that Storm Greeter loves a salty environment. In addition to the DOT test, Storm Greeter has been tested in open water two other times. In each instance, marine life adhered to the coating’s surface but could not penetrate it. Barnacles that have been on the surface for 13-months can be removed with a flick of a fingernail.

Our peel and stick coating system begins with VHB technology.  VHB is used by Toyota, Honda, Audi, and Volkswagen to connect steel panels when the use of rivets and screws won’t do.  They require the VHB interface to have a lifespan of 25 years before they will use it.

Probably the most notable and visible application of VHB technology is the Burj Al Arab Jumeirah Hotel in Dubai.  This hotel is located on a man-made island off the coast of Dubai.  It is covered with aluminum panels.  VHB was chosen to attach the panels to the building because of the intense heat, humidity, and high winds.  The aluminum panels are constantly expanding, contracting, and moving.  The VHB holds them in place, where screws and rivets would corrode, rust, or just tear through the aluminum.